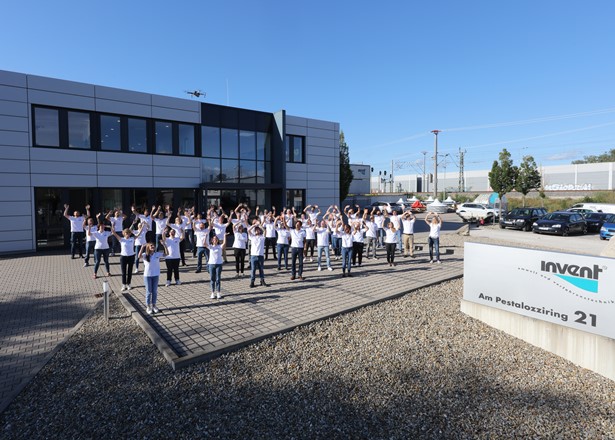 INVENT Umwelt- und Verfahrenstechnik AG is celebrating its 25th anniversary this year. The company based in Erlangen, Germany offers its customers groundbreaking technology for the purification of water and wastewater and is on course for growth worldwide.

Records show August 1, 1995 as the date that the company was established. However, the history of INVENT Umwelt- und Verfahrenstechnik GmbH & Co. KG as the company still went by at the time dates back about a decade further – as a project by scientists of the Department of Fluid Mechanics at the Friedrich-Alexander-University Erlangen-Nuremberg.

It started with the idea of developing sustainable, energy-efficient products for water purification and wastewater treatment viewed from an entirely different perspective, i.e. the fluid mechanics approach, and in doing so, setting new standards. With this idea, the experts revolving around Dr. Marcus Höfken – who at the start was the General Manager, and today is the CEO – took the step to venture into the economy, expanding with a clear purpose into the field of municipal and industrial water purification and wastewater treatment.

“Our huge commitment to manufacturing and utilizing high-performance products that contribute greatly to maintaining our water quality makes our company unique,“ explains Dr. Marcus Höfken. He continues to explain that INVENT is the only company worldwide that offers a truly complete array of products – from agitators, mixing and aerating systems, membrane aeration systems, water filters, flow simulation systems to engineering services – for biological wastewater treatment and as such is able to offer its customers turnkey system solutions from a single source. Dr. Marcus Höfken proudly looks back at what has been achieved so far: “I am really pleased that we have managed to develop and build up a company that operates on an international scale on the basis of scientific research work, and that this company is today among the top 5 globally in its field”.

However, the engineers from the greater Nuremberg-Erlangen and surrounding area really had to struggle to gain acceptance for the new technology at the end of the 1990s: The reason: Wastewater treatment turned out to be a very conservative market, in which introducing new products is a difficult endeavor.

The first major project was realized early in the first year of establishment with the wastewater treatment plant for the Reudnitzer brewery in Leipzig. The contract included its design, engineering, production, delivery and installation. In the subsequent years, Invent equipped almost all of the wastewater plants in Switzerland with proprietary hypberboloid agitators, which were also installed in three large sewage treatment plants in Berlin.

After years of successful pioneering work, the limited liability company (GmbH) was converted into a stock corporation (AG) in 2003, allowing it to then expand further worldwide. As such, several subsidiaries were established one after another in the United States (2004), Australia (2009), Italy (2010) and subsequently in the United Arabic Emirates (2011). And in between (2008), the company moved into the newly erected company headquarters in the Eltersdorf district in Erlangen. In 2016, INVENT AG acquired Geppert Rührtechnik GmbH from Erzhausen, a community in Hessen. Today, INVENT AG is home to a staff of around 120 employees worldwide.

The international orientation of the company has long since paid off. In the meantime, numerous wastewater treatment plants overseas bear the made in Erlangen, Germany stamp. In addition to several contracts from New York and Washington plants, of particular importance was a major contract valuing $16 million, which comprised a Baltimore wastewater treatment plant and was ultimately completed in 2017, was particularly significant.

Given the COVID-19 pandemic, there are simply quite a few hurdles that have to be accepted at this time. In particular, the absence of trade shows, conventions and even the ability for technicians to travel to customers in risk areas pose real challenges. Nonetheless, the company’s capacities are currently being well utilized. At this time, the team from Erlangen is beginning its largest industrial project of its company’s history thus far, a complete wastewater treatment plant for several refineries in the Middle East. The sales volume for this is in the double-digit million range. In addition, Invent was awarded the contract for two additional major industrial projects in Thailand and one in China.

Given the growing environmental problems, the outlook for INVENT AG is quite promising. “Over the past few years, we developed numerous new projects, which we are now successively introducing to the market, which will give us a lot of fun things to do in the coming years and also generate more sales,“ says Dr. Marcus Höfken optimistically.

In contrast, the Sales department and the organization as a whole is facing an increasing number of challenges. Plus, a new ERP system will be introduced next year.

Well equipped for new tasks, the CEO continues by formulating even more ambitious goals for the years to come. For example, the three of the youngest subsidiaries for high-speed turbo-blowers, for filtration and for industrial mixers are expected to contribute EUR 10 million each to Group sales in the near future.

Because of the COVID-19 situation, the company’s anniversary celebration was held in a smaller, company-internal setting on September 25, 2020.